Here is a link to all of the eclipse images that were shared by amateur astronomers at our site near Henderson, NE. 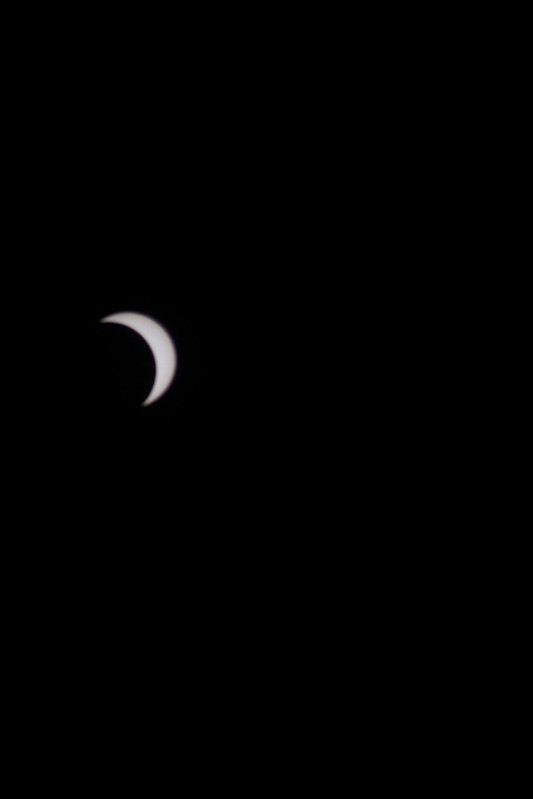 It was an awesome, memorable event. Maybe we’ll meet again in 2024.

Tillie, our female Scotty, got me up at 4:50 AM CDT. I took all of our dogs outside to do their business, and I am glad she got me up. The sky at that hour was mostly clear, and I saw many stars. I cannot remember the last time I saw The Milky Way as clearly as this morning. Nebraska does have the darkest skies in the country. It was a good start to a memorable day at The Prairie Oasis Campground.

The forecast for today had improved to mostly sunny which gave us some hope. A system of thunderstorms was staying well to our south over Kansas.

I met two amateur astronomers who were camping near us, and they let me look through their 10 inch Dobsonian, which had a solar filter. I was able to observe two groups of sunspots. I asked questions and listened as they explained the many advantages about their Dob. The woman who did most of the talking was named Sheila and she and her husband are from Ontario, Canada. I was also able to observe first contact with the moon at that precise time with their Dob.

We walked our dogs and had lunch about an hour before totality. I went out and took photos of everyone making preparations. At 20 minutes before totality it was looking weird. It was daylight but the lighting was curiously subdued. It was mostly cloudy, and I was preparing for disappointment, and was resigned that it would be a bust. However, Marla and I went over to sit on a picnic table, not far from our RV, to watch the sun through our eclipse glasses. At this point the sun was a crescent, and faded in and out with the passing of the cirrostratus clouds.

The local Mourning Doves started cooing as the clock ran down to totality. Suddenly, there was a opening in the cloud cover, and with that, totality occurred. There were cheers and hoots when we were rewarded with an awesome sight.

Television and photographs simply do not do it justice. The sky is actually a dark blue during totality. I looked directly at the incredible sight and tried to take photos. Totality lasted for 2 minutes and 30 seconds. I also kept an eye on the time and did a 5 second countdown to 3rd contact to warn people to put their eclipse glasses back on, and the sun emerged precisely at zero.

With only 250 seconds of totality, I messed up my camera settings, and didn’t get any useful images. This was my best overexposed image.

However, I asked the astronomers if I could buy their images. They said they’d share their images, copying them to my memory card, after processing them following 4th contact. I thanked them and said I’d be by tonight. Later, I obtained over two dozen images. Here are a few:

There was also an effect on the air temperature during the eclipse.

Through it all, our dogs were not impressed.